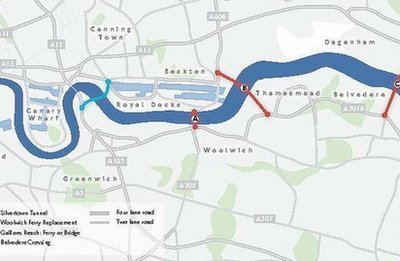 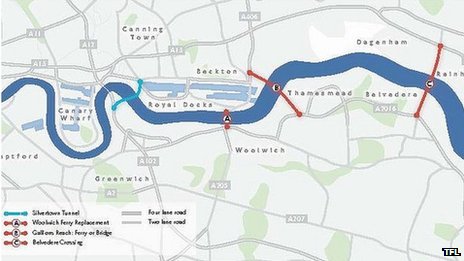 Transport for London have stated that the proposed crossing would reduce congestion.

Detailed plans for an east London river crossing have been unveiled as part of a public consultation.

Residents are being asked their views on the proposed Silvertown Tunnel, which would connect the Greenwich Peninsula with the Royal Docks.

Transport for London (TFL) said it hoped the tunnel beneath the Thames, which will cost an estimated £750m, would reduce congestion.

But the No to Silvertown group said it would "increase air pollution".

The London mayor Boris Johnson said the crossing would be a "vital new link".

"The Silvertown Tunnel would provide a vital new link beneath the Thames from two of our city's great opportunity areas for new homes and jobs - Greenwich Peninsula and the Royal Docks," said Mr Johnson.

"Unless new river crossings are provided, the huge growth potential of east London will not be realised."

The consultation includes proposals to charge users of the Silvertown and Blackwall Tunnels to help fund the construction of the new crossing, however the charges would be introduced after the tunnel opened. 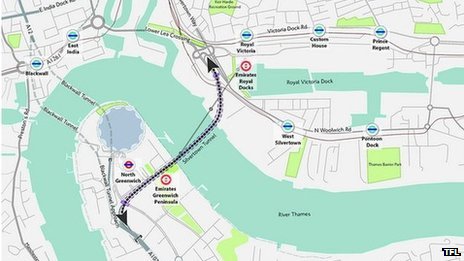 If the proposed tunnel is approved construction could start in 2017

The Silvertown Tunnel was designated a Nationally Significant Infrastructure Project by the government and TFL plan to apply for approval to build the tunnel in 2015.

If approved, construction could start in 2017 and take up to four years to complete.

But Darryl Chamberlain, from the No to Silvertown campaign group, said the plans would not benefit locals and could increase air pollution.

"This is the traffic equivalent of moving the deckchairs on the Titanic. Transport for London is deluded if it thinks the Silvertown Tunnel will cure congestion," he said.

"There's nothing in this for locals - it'll just encourage Kent car commuters to drive to Canary Wharf."

The public consultation on the Silvertown Tunnel will start from 15 October and will run until 19 December and the findings will be presented to the Mayor of London in 2015.