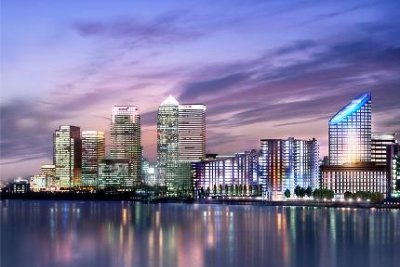 Canary Wharf’s tallest skyscraper, One Canada Square, is a familiar landmark on London’s magnificent skyline. For more than 20 years it has been a beacon, drawing businesses to its thriving financial district.

With a workforce of 90,000-plus, this meticulously planned suburb offers high-rise homes, smart dockside bars and restaurants and designer shopping.

Penthouses and luxury apartments with sweeping views across the Thames are snapped up by walk-to-work international investors and local financiers who keep unsociable hours. And with easy transport links, including a swift river taxi, buyers never have to miss out on what central London has to offer.

Surprisingly, you can still find good-value town houses, Victorian cottages and waterside flats in Canary Wharf - if you know where to look. According to Tony Usher of Jones Lang LaSalle, as no new developments are due for completion in the next few years, the fringes of Canary Wharf are becoming the next hot spot, moving eastwards towards areas such as Limehouse and Bow.

“The regeneration of East London is fast paced and innovative, and could end up as an extension of the Canary Wharf district, seeing similar changes to that experienced by the Isle of Dogs over the last 10 years,” says Usher.

The area’s strong rental demand means that many homeowners are keeping properties to rent out, instead of selling them when they move on. Usher says: “People are very aware that property prices still have a lot of potential growth and with the strong rental market and excellent transport links, Canary Wharf is still very affordable compared to the rest of London.”

Properties range from ex-local authority flats to multi-million pound apartments. There are plenty of modern developments as well as family town houses, Victorian cottages, warehouse lofts and the more affordable apartment blocks further south on the Isle of Dogs.

Who is buying here?

The majority of buyers are young couples who work locally and investment buyers from all over the world. There is huge demand from international investors buying off-plan and within modern developments. We also find overseas buyers seeking properties for their children while they are studying in London.

Lots of the smaller apartments are used as midweek pieds-a-terre, while some of the higher end apartment blocks also house a number of celebrities and premier league footballers.

What are the hottest properties?

Pan Peninsula is a popular block offering impressive, high-end facilities and prices to match; there is a residents’ cocktail bar on the 45th floor, a private cinema, gym, spa and swimming pool. There is currently a two-bedroom flat for sale at Pan Peninsula in Canary Wharf for £600,000 on the 15th floor.

The Landmark Apartments, completed only 18 months ago, have generously-proportioned apartments that are closer to the river’s edge and have stunning views across the capital’s skyline.

Canary Riverside is the only residential development on the Canary Wharf Estate, so residents live a stone’s throw from the financial towers and benefit from the same security used within the estate. Built in 1999, this was one of the first high-end residential schemes in the area. Flats facing the river are sought-after but rarely available. A two-bedroom flat at Canary Riverside is for sale for £795,000.

Where are the hidden gems?

Buyers seeking more space can still find good-value homes just a mile from Canary Wharf. For example, a two-bedroom apartment is for sale in the Galaxy Building on Westferry Road, with more than 1,100sq ft of space, a balcony and parking, for £410,000. These older apartment buildings are often overlooked.

There are only two streets of period homes in this area, with old dockers houses on Eastferry Road and Chapel House Street. Apart from the ex-council homes, the properties around St David’s Square are among the oldest but even these are only 15 years old.

Where are the best investment opportunities?

Canary Wharf is already very built up and has seen many new developments completed and sold out in the last two years. CQ London is a stylish new development of studios (priced from £164,950) and apartments (two-bedrooms priced from £320,000) at Limehouse which is completing now; Aqua Vista, adjacent to Limehouse Cut, and has only a handful of apartments remaining - prices from £164,950 for a studio or £249,950 for a two-bedroom flat. Keep an eye on the area towards Bow as there are two very exciting new developments which are currently in the construction phase and due to be launched in the UK very soon.

Service charges vary depending on the facilities. They can range from £1,500 a year in the smaller blocks, up to £7,000 a year in the most desirable developments. Penthouses, however, can attract annual fees of up to £22,000.

Where is your dream home?

The penthouses have stunning views and are exquisitely finished to the very highest specification.

But on a more realistic note I would have to choose a flat overlooking the Thames facing west towards the City - an eternally moving picture of river life by day and beautiful sunsets over the iconic architectural skyline of London.